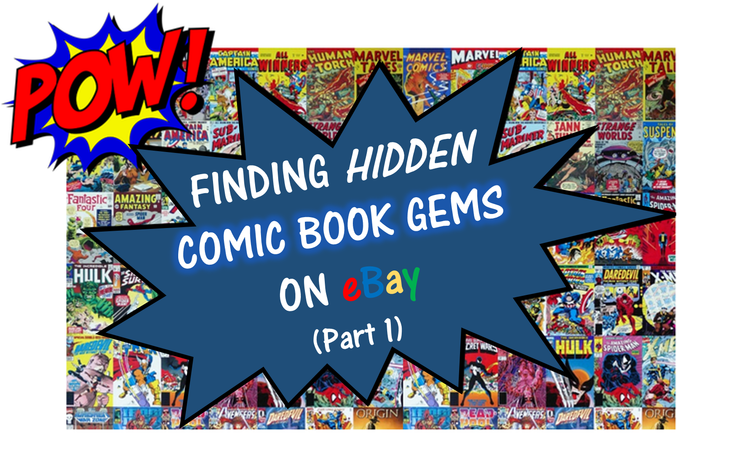 I’m kicking off the series of eBay comic tips with the subject of comic book lots because sellers always seem to make mistakes with these. And every hidden gem comes from a seller mistake. This is because if the seller knew the value of the gem and how to market it appropriately, then the comic wouldn’t be a hidden gem, it would just be a gem – and those are expensive.

For this first post I’m focusing on single auctions that contain multiple items. Selling multiple items at once can be tricky, especially for amateur sellers who often make mistakes in the listing. But if you’re a buyer these mistakes can be gold. Here are a few examples I’ve seen.

eBay Comic Tip #1: The LOT Contains a Key Issue, But Not the Issue Number

This happens WAY more often than you might think. Check out this listing…

What was this seller thinking? Amazing Spider-Man #300 is, of course, the first appearance of Venom and Marvel Super Heroes Secret Wars #8 is the origin of the black costume. Both of these are always HOT items.

The seller clearly knew something about the value of the comic and gave it a catchy description, but neglected to include the issue numbers or include any reference to “first” or “1st” appearance.

This is a problem because the eBay marketplace is really a giant search engine. And if no one can find your comic no one can bid on it. This means that if you’re a buyer and you manage to find this lot you’re going to have much less competition with your bidding. (Further below I give some eBay comic tips on how to find it.) So if you were shopping for Amazing Spider-Man #300 this was a great find.

But as you can see, no one found this lot and it didn’t sell. However, it seems the seller realized their mistake and relisted this item. Note that the second attempt included an issue number and look what happened…it sold.

The takeaway here is that if the buyer had found the earlier listing they could have saved nearly $100. The seller lucked out in this case. Although, I’m sure he would’ve had more bidders and a higher sell price with a better selling history.

Selling multiple comic lots can be tricky business. One area that sellers consistently get wrong is the main picture for the listing. Of course the seller should showcase what makes the lot valuable, but, sellers don’t always know what that is, especially if they don’t know much about comics.

This listing is a great example . . .

This lot contained a copy of New Mutants #98, the first appearance of Deadpool. It’s an instantly recognizable cover, if you can see it.

This lot had New Mutants #98 tucked away between two other comics in the main display. In order to see a close up of this key issue you had to scroll all the way to the seventh picture. How could the seller make such a mistake?

Because of confusion over what made their lot valuable. Here, the description emphasizes the high number of comics in the lot and they’re all displayed in the main picture. But the value of this lot was NOT that it contained a dozen or so issues, the value was that it contained New Mutants #98 (and a couple other first appearances).

The seller’s confusion over what made the lot valuable absolutely hurt the bidding. What you can’t see from the main picture is that the issue of New Mutants #98 in this lot is a newsstand edition in an apparent NM condition. Currently a CGC graded 9.4-9.6 copy of a New Mutants #98 newsstand edition is commanding between $450-$900 when you can find it. In my opinion this lot should have gotten much more than the initial asking price. This is a great example of how these eBay comic tips can help buyers and sellers!

The seller also doesn’t include the search terms “first appearance” or “98” in this listing.

After finding this one, I searched eBay for “New Mutants 98” and “New Mutants Deadpool first appearance” just to see if eBay’s search engine could find it. And it did not. Surprisingly, even the phrase “1st Deadpool” in the description was insufficient to get it displayed with other New Mutant #98 comics.

So how do you find these deals if they aren’t coming up on a search in eBay? I use two different strategies depending on whether I’m searching for a specific comic or just looking to see if I can find a deal.

SEARCHING FOR A SPECIFIC COMIC IS HOW I FOUND THIS NEW MUTANTS #98.

I had been searching for a newsstand copy of this issue for a while, but everything cost more than I was willing to spend. In order to get a less expensive copy I had to look where other buyers were not.

First, cast a wide net in your eBay search. I did this by searching for “New Mutants lot”. I didn’t include “98” because that would have brought up copies with heavy bidding or high starting bids out of my price range.

Second, look at the descriptions more than the pictures. I wanted to find a lot that had a range that included #98, but preferred one that didn’t showcase #98 on the cover. Why? Because a lot that showcased #98 would have attracted more bidders. And if a hidden gem isn’t hidden, it’s just a gem – and those are expensive.

After I found the New Mutants listing I went and looked at the pictures and did the normal amount of due diligence I do before making a bid. While it may not be the greatest find in the history of hidden gems, I think it saved me a few hundred bucks (especially if I sell the rest of the lot).

I ended up slabbing the New Mutants #98 first appearance of Deadpool after getting it signed by Fabian Nicieza and it came back a nice CGC 9.6!

SEARCHING FOR NOTHING IN PARTICULAR BUT A GREAT DEAL REQUIRES A BIT MORE PATIENCE.

First, cast an insanely wide net. When I say insanely wide, I mean ridiculously huge. Something like “comics lot” or “Spider-Man lot” and then restrict the search results to just show comic books. This is how I found the first example above.

Second, look at the pictures more than the description. When I don’t have a specific issue I’m looking for it means I don’t have anything to help me winnow the thousands or millions of results in the description. Consequently, I’ve found it much more efficient to scroll through pictures. Most of the listings aren’t keys and I can scroll through them pretty quickly. However, something like the picture of Amazing Spider-Man #300 and Marvel Super Heroes Secret Wars #8 will definitely catch my eye no matter how fast I’m scrolling.