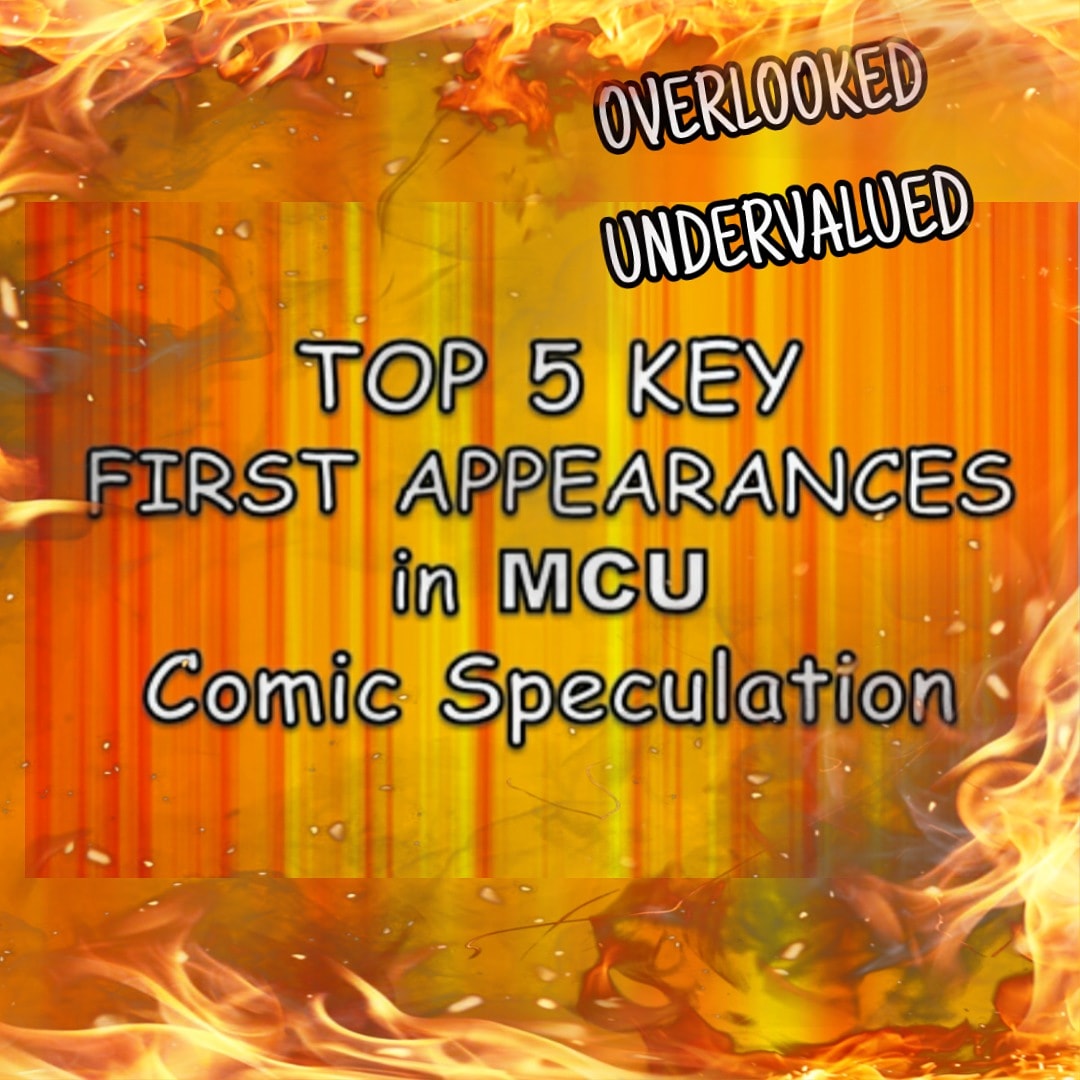 Movie release dates for the MCU keep getting pushed back and this has a huge impact on comic prices and speculation. For better or worse, a film’s success can heavily influence a comic’s value. Easter eggs, hints and clues of future story lines, and new character introductions also drive comic prices up.

While these delays disrupt normal comic speculation cycles, they also present an opportunity for savvy speculators.

Without the influx of new movie trailers that sustains interest in future projects, attention shifts from key issues that would normally get some time in the spotlight. This is especially true for lesser known keys. In this post I highlight 5 key comic first appearances that are connected to upcoming film projects that have been overlooked or forgotten about.

Most comic collectors have probably never heard of Peter Wisdom. Which is why now is a great time to buy his first appearance if he joins the MCU. But who is he and why do I think he might be coming to the big screen?

Peter Wisdom is a mutant with connections to Excalibur and the leader of MI-13 a secret British intelligence agency. And there are actually quite a few clues that suggest we might see him in the MCU. First, Marvel is quietly bringing in other members of MI-13. Black Knight, played by Kit Harington, is entering the MCU in the Eternals. Blade, played by Mahershala Ali, is another MI-13 character that will soon be joining the Marvel movie franchise. Another member, Brian Braddock, aka Captain Britain has also been teased in Endgame (see #2 below).

And doesn’t introducing seemingly unconnected characters across a string of unrelated movies in order to assemble a secret team sound like something Marvel would do? It should. That’s how we got the Avengers.

Additionally, Disney CEO Bob Iger announced in 2018 that they were going to develop another team beyond the Avengers. While many guess this will be Thunderbolts, it’s entirely possible that MI-13 may be in the works. This is especially the case if Marvel wants to have a group that can take on strange and spiritual threats, which is the direction it looks like they may be going with the upcoming WandaVision and Dr. Strange in the Multiverse of Madness.

For an in depth description on Peter Wisdom check out a great article from Bounding Into Comics. And if you’re still not convinced, see Screen Rant’s article that also makes a strong case for Pete joining the MCU.

While we’re talking about British superheroes, one of the biggest Easter eggs of End Game was a seemingly throw away line from Peggy when Cap goes back to the 1970’s. Her comment that “Braddock hasn’t checked in” may be a reference to either James or Brian Braddock, both of whom have super-powered goings-on. But Brian Braddock, who takes the mantle of Captain Britain also has connections with Excalibur and MI-13.

If there’s a chance that the MCU may be incorporating Brian Braddock/Captain Britain or Excalibur into upcoming movies then you may want to strongly consider picking up a copy of New Mutants Annual #2. This comic provides two important US first appearances: Betsy Braddock and Meggan.

Betsy Braddock is Brian Braddock’s twin sister so if he’s coming to the MCU then it’s a good bet that she will be joining him. She is an extremely versatile character who could play several roles in the franchise as either hero or villain because of her complex past as both Captain Britain and Psylocke. And this theory is supported by ongoing rumors that Marvel is hoping to introduce M.O.D.O.K., the big bad who turns Betsy Braddock into Psylocke. The first appearance of Betsy Braddock listed above is her first US appearance. Her true first appearance is in the Marvel UK publication Captain Britain (1976) #8.

Meggan Puceanu is also a prime candidate for introduction into the MCU because of her romantic relationship with Brian Braddock (the pair eventually marries). And, remember, the Braddock family has already been referenced in Endgame. But even apart from Brian, there is plenty of other reasons to suspect she may be find a spot on the big screen. She is an extremely powerful mutant who is a member of MI-13 and regularly runs with Pete Wisdom. She is also a former member of Excalibur, so if that team is put together, there is a strong likelihood that she will be part of it.

Given that the introduction of these characters were introduced to US audiences in New Mutants, I think it would be natural to see some evidence of their joining the MCU in the upcoming New Mutants movie. I’ll definitely be looking for an Easter egg, especially for Meggan because her origin story includes time spent in a concentration camp for those with powers – not completely unlike the facility that is holding Magik, Wolfsbane, Cannonball, Sunspot, and Mirage. Meggan’s true first appearance is in the Marvel UK publication The Mighty World of Marvel (Vol 2) #7.

This is a very difficult book to find and rarely appears on eBay. And when it does, it doesn’t last long. As a result, New Mutants Annual #2 will see a lot of attention if Meggan makes an appearance.

It’s no secret that I’ve been a spec fan of this comic for a while. As soon as Marvel announced that WandaVision cast Kathryn Hahn in the role of “nosy neighbor” I suspected that this was simply a cover for the introduction of Agatha Harkness. For a detailed explanation, you can check out a YouTube video I made explaining why this theory makes sense. Since I made the video this theory has gained a lot of attention, especially after leaked set photos for WandaVision revealed Kathryn Hahn tied to a stake in colonial attire looking like she just lost a witch trial in Salem. This seems to suggest Hahn plays Agatha Harkness because the character has ties to Salem and is a powerful witch who trains Wanda and helps her become the Scarlet Witch.

So while this book isn’t overlooked there is still reason to believe that it’s undervalued. Until we hear confirmation that Agatha Harkness is actually joining the MCU or see her on the screen, prices of this issue still only reflect that potential. If and when she actually appears, the price of her first appearance will likely spike and remain high for two reasons.

First, Agatha Harkness plays a huge role in many of the most important story lines connected to the Scarlet Witch and her children, which we know will debut in WandaVision. Second, Agatha Harkness provides Marvel with an easy way to introduce other characters into the MCU. The most obvious possibility is the Fantastic Four since she is the nanny for Franklin Richards, the son of Sue and Reed Richards.

Another character to be on the lookout for in this show is Martin Preston, aka Master Pandemonium. He is a prime suspect because we know through Disney’s teaser trailers that WandaVision will introduce her children, William and Thomas. And this is causing people to speculate on Young Avengers #1 (where her kids appear as Wiccan and Speed, BUT this is also the first appearance of Kate Bishop the new Hawkeye).

Meanwhile, West Coast Avengers #4 slips under everyone’s radar because Master Pandemonium is a lesser known character even though he plays a key role in the story of the birth and death of Wanda’s kids.

The role that Master Pandemonium plays and his involvement with Scarlet Witch’s kids is one of Marvel’s most disturbing story lines. A brief summary is that he is used by Mephisto to collect their souls since Mephisto unknowingly played a role in their inception. Master Pandemonium basically devours them and then uses them to try and devour Wanda before she is rescued by Agatha Harkness. It’s an elaborate, messed up story that ends up spanning decades; if you want more details check out the YouTube video I made and referenced earlier.

I like Master Pandemonium as a speculation pick for a lot of reasons. He isn’t well known so his first appearance is only a couple dollars. That means there is tremendous room for growth. He is also deeply connected to Mephisto and Agatha Harkness, two characters that are heavily rumored to soon be making debuts in the MCU. I also think the introduction of Master Pandemonium is also consistent with the darker and more horror-like movies Marvel has been hinting at for a while now.

So what do you think of these picks? Are there other overlooked or undervalued comics connected to the MCU that I missed? Shout’em out in the comments below.

Disclaimer: Obviously none of this is investment advice, just good ole’ fashion rantings of a collector that occasionally buys low and sells high…or buys high and puts it in a box instead of selling low. Let me hear your rantings below.