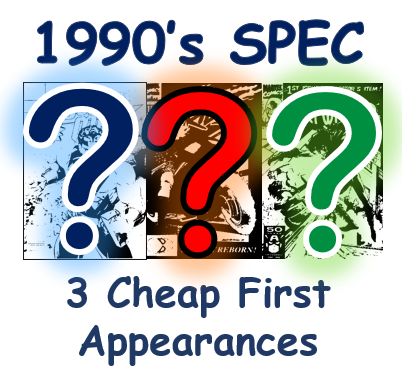 This year has seen a huge surge of interest for classic 80’s and 90’s key comics. Maybe its because 2020 has been such a train wreck that people are longing for the comics they grew up reading? Whatever the reason, nostalgia seems to have had a powerful impact on the market. G.I. Joe #1, Teenage Mutant Ninja Turtles Adventures #1, and Transformers #1 have all sky rocketed in price.

Traditional comic superhero keys from this era have also performed well. The first appearance of Bishop in X-Men #282 was a $3 book forever – they printed a gazillion of them, but now it’s a $20 book and selling strong on eBay. A lot of the copper age spikes are coming from movie speculation. This isn’t bad. Many of comics greatest characters have come from this period. Deadpool, Harley Quinn, Gambit, and Venom are just a few of the heavy hitters.

But there are still many first appearances getting overlooked!

Many more characters are waiting to be tapped and the fact that movie studios are looking to this era of comics for inspiration is a great indicator for comic speculation. I mean, look at the price jumps that X-Men #4 have made over the last year since it’s been confirmed that Omega Red is coming to the MCU. Recent rumors about Marvel trademarking Darkhawk have also sent his first appearance in Darkhawk #1 skyrocketing.

Don’t feel bad if you have never heard of this character. He debuted in 1991 along with a host of other new heroes (including Darkhawk), but never seemed to take off. The lack of success was probably due to his strange origin and crazy cast of villains – but that doesn’t mean that his storylines weren’t some of the most creative getting told at the time. Sleepwalkers are basically dream police from the Mindscape dimension and one gets trapped in the mind of college student Rick Sheridan. What results is basically a Hulk/Bruce Banner situation where Sleepwalker and Rick Sheridan have to figure out how to cohabitate while fighting off bad guys in both realities.

But the spec gets even better. One of Sleepwalker’s first storylines takes place right after the Infinity Gauntlet storyline where he teams up with Darkhawk, Deathlock, and Moon Knight to ward off new threats after Thanos is defeated. This is right where we are in the MCU. We also know Moon Knight is coming and Darkhawk may be on the way. Could Sleepwalker be far behind?

SPEC TIP: If you decide to pick up a copy of this book, I would try to find a newsstand copy. I don’t think this book had a particularly high print run, so the newsstand is going to be that much harder to find – and that much more valuable.

This was honestly one of my favorite titles growing up – I thought it was hilarious. But that’s not enough to get it on this list. No, Wonder Man #1 has earned this spot for other more objective reasons. True, this comic is not Wonder Man’s first appearance (that belongs to Avengers #9 – he also died in this issue…he has a long origin story). However, this comic is the first issue in an ongoing series (there was a solo one shot in 1986).

Wonder Man is really Simon Williams and he is closely tied to many of the MCU’s leading cast of heroes. Most notably – Vision. Through a crazy series of events like only Marvel can deliver, it turns out that Vision’s personality is actually that of Simon Williams. This results in more than one Scarlet Witch induced love-triangle-feud between Vision and Wonder Man over the years. In fact, Wonder Man was already supposed to have a bit of a cameo in the MCU (played by Nathan Fillion no less), though the Easter Egg ended up getting cut.

Besides, isn’t Vision’s personality already a composite of Jarvis, Tony Stark, and Bruce Banner? True, but if Wanda is going to bring him back to life, she may need the blue prints of other living people. Additionally, trailers for the series have her bringing Vision back through a series of sit coms and in Wonder Man #1, Simon makes his series debut as a struggling actor out in LA.

Is this just a coincidence? Maybe. But its not the only one. Wonder Man also plays a big role in the storyline of Wanda and her two (demon-baby) kids when they battle Master Pandemonium in West Coast Avengers. And this storyline is heavily anticipated part of the upcoming WandaVision series.

But Wonder Man also is a longtime Avenger and one time romantic partner of Captain Marvel. He was also heavily involved in the Kree wars. The guy has been around forever and his first solo title is still selling for only a few dollars – for now.

SPEC TIP: If you do decide to pick up this copy, be sure that the comic still has the fold out poster inside and intact. As always, with copper age keys the newsstand editions are the ones you want to be on the look out for.

This reboot of the original bronze age storyline gave us the first appearance of Danny Ketch as the new Ghost Rider. This book has long been on the radar for many and always moves on eBay. But it’s never really taken off either. That may be changing.

Rumors have been circulating that Ghost Rider will eventually be joining the MCU. If he does, the question remains, which Ghost Rider will he be? The most recent option is Robbie Reyes, but this has seemingly been ruled out when Marvel killed the series that had been getting developed for Hulu. The classic choice is Johnny Blaze, of course, but Kevin Feige has never really gone with the easily predictable options. Also, we’ve already seen Blaze on the big screen several times when he was played by Nicholas Cage. Still a lot of people are looking for Blaze since Marvel got the movie rights for the character back in 2013.

There is one option that has both Johnny Blaze and Danny Ketch – the Midnight Sons storyline. And this storyline is rumored to be in the works for Marvel Studios. The Midnight Sons is essentially a team of Marvel’s darker heroes including Blaze, Ketch, Doctor Strange, Hellstrom, Morbius, Jennifer Kale, and Werewolf by Night. A number of these names are already in movies or or on their way to getting them released. And even if Blaze is the first Ghost Rider to enter the MCU, once that happens I don’t think Danny Ketch is far behind.

SPEC TIP: Be on the look out for a particularly rare second print of this book. You can identify it by the picture of Ghost Rider in the UPC box instead of Spider-Man.

If you’re interested in other cheap first appearances, check out the blog: 25 Key Comic First Appearances Under $25!