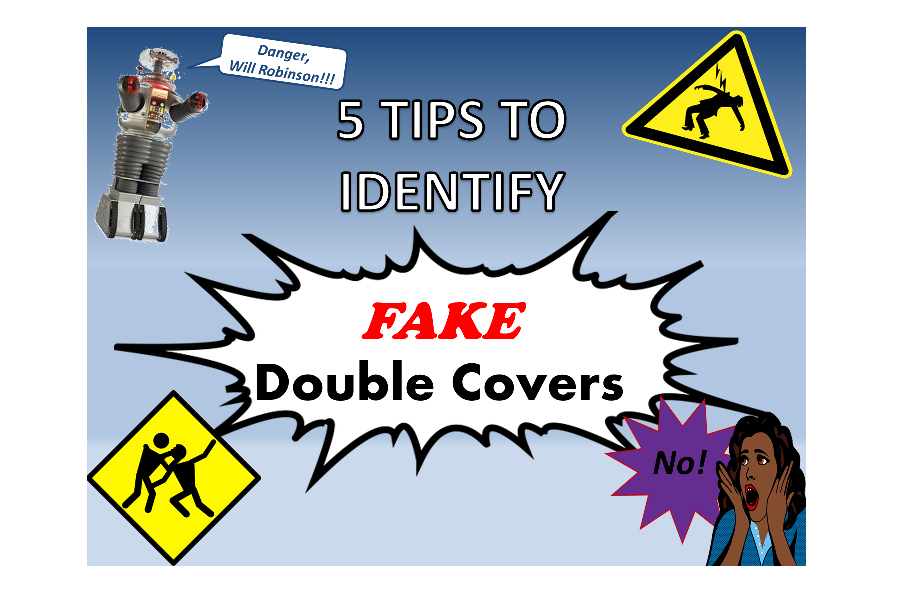 Comics with double covers are cool and rare and awesome, but only if they’re genuine. In this post I share five tips to help you determine if the double comic you’re looking at is real or fake.

(If you prefer to get this info in video form, check out my video on the same topic.)

First, why would someone fake a double cover? To make money, of course. The demand for these scarce comic book oddities has grown considerably in recent years and comics with double covers regularly obtain much higher selling prices than the same issue with a single cover. Unfortunately this price differential comes with a huge downside – frauds. There are more than a few terrible folks who create fake double covers to sell to unsuspecting collectors.

But, really, how can there be a fake double cover? Either it has two covers or it doesn’t. Right? Wrong.

A genuine “Double Cover,” as designated by CGC, is a manufacturing error. This means the comic was originally made with two covers and it left the factory that way. CGC defines a Double Cover as: “A mistake in the manufacturing process sometimes results in two or more covers being bound to the same comic book. It is not considered a defect.” Because genuine double covers aren’t defects, having a second cover doesn’t negatively affect the comic’s grade. In fact, the CGC label of a genuine “Double Cover” will show the individual grade of both covers and the highest is used to give the comic its overall grade. CGC will give a double cover comic a Blue Label unless other factors push it into another category (ex. Signature Series/Gold Label or Restoration/Purple Label).

But the fake double cover, despite having two covers, isn’t actually a “Double Cover” at all. CGC uses the term “Married Cover” to describe a comic that has a cover attached to it that originally came from another comic. CGC will give a comic with a “Married Cover” or “Married Pages” a green label indicating it’s a qualified grade. More frequently, you’ll see a “Married Cover” designation on a purple label indicating the comic has undergone restoration. This is because replacing a damaged cover or page from another comic isn’t uncommon, especially in Golden Age comics where a lot of restoration is often necessary.

To help illustrate these tips, I’m going to use as an example a fake double cover issue of Spider-Woman #1 that I bought on eBay.

When I won the auction I was ecstatic – it’s a double cover on a key issue! But as soon as the comic was delivered and I took a closer look at it, I quickly saw that it was obviously a fake. I let the seller know (with pictures) and, thankfully, he refunded my purchase. But how did I know? Here are five ways to determine if a double cover comic is fake:

Tip #1 to Identify a Fake Double Cover: The comic has multiple/large staple holes.

But you may be asking yourself, if someone is going to fake a double cover why be so sloppy? Why not just match up the staple holes?

The problem for the forger is that if they match up the staple holes, the new exterior cover will inevitably be crooked compared to the rest of the comic. This is because staples on comic books are not identically placed. Like finger prints, no two comics are identical. While recent technology improvements in comic book printing and manufacturing have made comics much more uniform (and also decreased the likelihood that a double cover will occur), older comics have all kinds of variations.

So in this example the multiple staple holes were inevitably created in order to have the two covers align properly in the front.

Which leads us to…

Tip #2 to Identify a Fake Double Cover: The front and back covers aren’t aligned.

The front covers of the Spider-Woman #1 aligned pretty well. But check out the back covers:

With rare exceptions the exterior cover should line up almost perfectly with the interior cover in the front AND back. This has to do with how the comic is made. A genuine double cover is created when, for whatever reason, rollers pulled two covers that were then attached to the rest of the comic. What’s important is that after those two covers were pulled, they were treated exactly the same. This means they were aligned together when staples were put into the comic. And this means they should line up on both sides of the comic.

In contrast to the Spider-Woman #1 above, here is an example of an actual double cover from my collection that was graded by CGC. Take a look at the two covers… They are so perfectly aligned that it’s really difficult to tell this comic even has two covers.

It’s a pretty stark contrast to the misaligned covers in the Spider-Woman #1 example. Even though double covers may not always align this perfectly, it should always be REALLY close.

The staples in a comic should be closed. It may not be something you would automatically look for, but it’s a huge giveaway that the comic has been tampered with. This is because normal wear and tear on a comic doesn’t cause the staple to open and close. If it does…you’re reading it wrong.

And this is what the top staple looked like on the Spider-Woman #1 comic.

So why didn’t the terrible criminal that made this heinous fake just close the staple? Well, clearly you’ve never tried to open and close a staple. It’s a lot harder than you think. And it’s even harder when you’re trying to do it without crumpling the comic. Don’t believe me? Buy a dollar comic somewhere and give it a try. Let me know how it goes.

Tip #4 to Identify a Fake Double Cover: Signs the comic was pressed by an amateur.

Imagine you’re the evil person that is going to make and sell a fake double cover comic. First you’ve taken out the staples of both comics. You’ve lined up the second cover as best you can and tried to minimize, as much as possible, the multiple staple holes that will inevitably result. But after you push the staples through and close them, you look at your monstrous creation and realize you have another problem…

The new second cover’s fold doesn’t match the rest of the comic. It’s not a huge difference, but it’s clearly visible. So what do you do? The only thing you can. You press it. Under enough weight for a long enough time, the folds will merge sufficiently to appear the same.

However, a lot can go wrong when amateurs press a comic book. Here’s what happens when you can’t close a staple properly and then you press the comic by piling a bunch of Encyclopedia Britannica’s on top of it.

The weight of the press on the open staple has clearly marked the paper. So, I know this probably doesn’t need to be said, but no comic ever leaves the factory looking like this. If you see this in a comic you are considering buying, run.

Tip #5 to Identify a Fake Double Cover: No other double covers of the same issue.

Remember that a genuine double cover is the result of a manufacturing error. It exists because a machine malfunctioned. And when a machine malfunctions, it generally does so more than once. Chances are good that if a roller pulled two covers once, it probably did it a few times. This means that one good way to check the validity of the double cover you’re looking at is to see if other documented double covers of that same issue exist.

So how do you check if there are other double covers out there? We’ll, there are a couple of difficult ways to do this (scour eBay and auction sites) and one easy way. I’ll share more about the easy way.

Check for double cover sales using GPAnalysis. GPAnalysis is a website that tracks every public CGC comic sale. Unfortunately the site is not free. NOTE: I’m not affiliated with GPAnalysis and receive no compensation for this endorsement, but it would be cool if I was (call me).

Let’s take a look at our Spider-Woman #1 example:

GPAnalysis tracks all kinds of sales for Spider-Woman #1, but there is no record of any double cover being sold. And Spider-Woman #1 is a key issue with 2,468 comics earning a blue label at CGC. That’s kind of a lot for no double covers.

As a comparison, check out Iron Man #55 (1st appearance of Thanos). This comic is also a key and has a similar number of submissions to CGC with 2,744.

So it has all the same kinds of detailed transactions as Spider-Woman #1, Pedigrees, Signature Series, etc. But it also has quite a few Double Cover sales. That indicates that the machines manufacturing this comic were having some issues. But that’s helpful information if I’m trying to evaluate whether the double cover comic I’m looking at is genuine.

Hopefully you found this helpful! If so or if not, let me know. I’d love to hear your double cover success and horror stories.

Transparency is good! So you should know that when you click on links to various merchants on this site and make a purchase, this can result in this site earning a commission. Affiliate programs and affiliations include, but are not limited to, the eBay Partner Network. Thank you for your support!